André Desjardins was born in Hauterive, Canada, in 1964. His fascination with art, history and geography goes back to early childhood when he would spend hours upon hours drawing, tinkering about, building, creating. Another favoured activity was leafing through atlases and encyclopaedias of the family’s extensive library. He was constantly on the lookout for anything new to feed his boundless curiosity: books, music, magazines, comics. At twelve years old, his young world came crashing down with the sudden loss of his father. Coping with the family grief as best he could, he found solace in the peaceful tranquility of the Magog family’s large basement. This haven housed his very first large-scale creation: a miniature city. Four years from start to finish: he was now sixteen. Nothing was missing: houses, stores, schools, parks, a port, a railroad. Every building had electricity; the train meandered through the town and its surrounding valleys. His teenage mind already had an exceptional grasp of spacial organization.

At eighteen, Desjardins left the family home in the country and headed for the big city. He studied graphic design at the University of Québec in Montreal. He devoted his spare time to painting, technical and artistic drawing, as well as designing and building furniture for his first apartment. He also explored interior design and architecture. Each discipline fuelling his creativity. 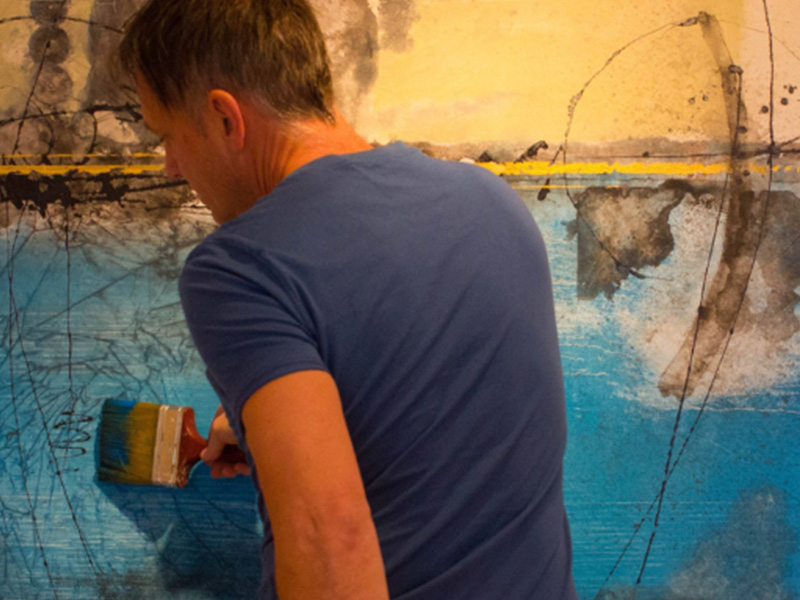 After completing his Bachelor’s Degree in 1988, he opened his own marketing firm and poured his energy and talent into building a successful business. A few years later he was at the head of a very lucrative enterprise with an enviable reputation and many employees; a dream come true. But after fourteen years of hard work, his heart was not in it anymore. Desjardins decided to sell the firm, leaving behind the world of marketing to concentrate on his true passion: manual work.

This major turning point coincides with his meeting Hélène Bélanger-Martin, the young woman who would become his muse. With a background in gallery management and a Bachelor’s Degree in Art History, she looked at Desjardins’ artwork with knowledgeable interest. Her involvement, observations and questionings gave the artist the impulse to reinvent his work, to search, to re-examine, to dive deeper… From that moment on, creation became his main occupation. His only preoccupation. He painted daily. A first exhibition was held at the Monument National, in Montreal. Visitors were captivated by the serene and peaceful mood of his paintings, their sacred and spiritual qualities. The demand for his works and the list of collectors increased steadily year after year. His works were included in numerous prestigious public and private collections. Desjardins was now dreaming of making a name for himself in the United States.

In 2008, he presented his works at ArtExpo New York where the response exceeded his expectations. Not only did he sell 26 paintings, he was also approached by Masterpiece Publishing, a major name in the US fine arts industry. The agency’s reputation is based on the quality of its artists as well as the great number of galleries carrying their works. Daniel Winn, its founder and CEO, has been prominently instrumental in Desjardins’ rise to notoriety. His works are now on exhibit in many galleries throughout the United States and are part of numerous private collections. Recognizing the sculptural aspect of his protege’s bi-dimensional works, Winn suggested that Desjardins explore sculpture. That’s all it took for him to throw his heart and soul into this new adventure. With a deep understanding of objects, space, tri-dimensionality and human anatomy a majestic eloquence is revealed through this new medium. His portfolio now holds close to thirty sculptures, including “Recevoir Héroïque” the limited edition of 8 monumental sculptures created in 2013. Measuring over 11 feet high, this impressive work stands in private gardens in the US and Canada. Then, in 2021, it’s the turn of “Libre, monumentale”, this one being 12 feet high. The imposing work overlooks the shores of Lake Memphremagog and all stages of its creation have been beautifully documented as part of the film “Libre”, screened in world premiere at the 40th edition of the prestigious Festival International du Film sur l’Art.

In 2009, André Desjardins and Hélène Bélanger-Martin founded the ROCCIA gallery. First nestled in the heart of Montreal’s ExCentris Complex, the gallery quickly moved to a large space on St-Laurent Boulevard, where it lived for seven years. A dynamic space renowned for its warm welcome, the gallery has exhibited the works of Desjardins and those of several other renowned artists. Over the years, the idea of migrating the business to the countryside became a priority for the couple. In 2017, the new ROCCIA gallery opens its doors in Magog and now exhibits exclusively Desjardins’ works.

Desjardins is now celebrating 20 years in the business. His bold and atypical career testifies to a great strength of character and an unquenchable thirst to create, to touch the material. He paints and sculpts characters in a state of fullness. His works do good. They offer a pause, as a stop to the too many acts of violence in our world.

In 2022, André Desjardins is experiencing a particularly fruitful year of creation as he produces more than twenty paintings and a series of sculptural works that will mark the collective imagination. We retain, among others, “The Guardian V”, “The turning point” and “The flight”, not to mention his very recent collection “The little climbers” which caused a sensation during their unveiling. This collection, which will eventually include fifteen small bronze climbers and which will be the subject of a longer-term “Life size” project, celebrates collective effort, mobilization and mutual aid.