This intimate documentary follows sculptor André Desjardins’ creation of a monumental sculpture destined to be installed on the shores of the inland waters that witnessed his childhood and teenage years, lake Memphremagog. The artist opens the doors of his studio, nestled deep in the forest. Alone, surrounded by silence, he sands, polishes, cuts, and reworks the materials of his craft. The sounds of nature merge with the humming of his tools. Seasons flow into one another. Slowly, we observe the birth of Free, an eight-foot-tall kneeling figure. The lengthy creative process is punctuated by moments when the artist shares his thoughts. He revisits memories of childhood loss and grief, solitude, and an insatiable need to create. 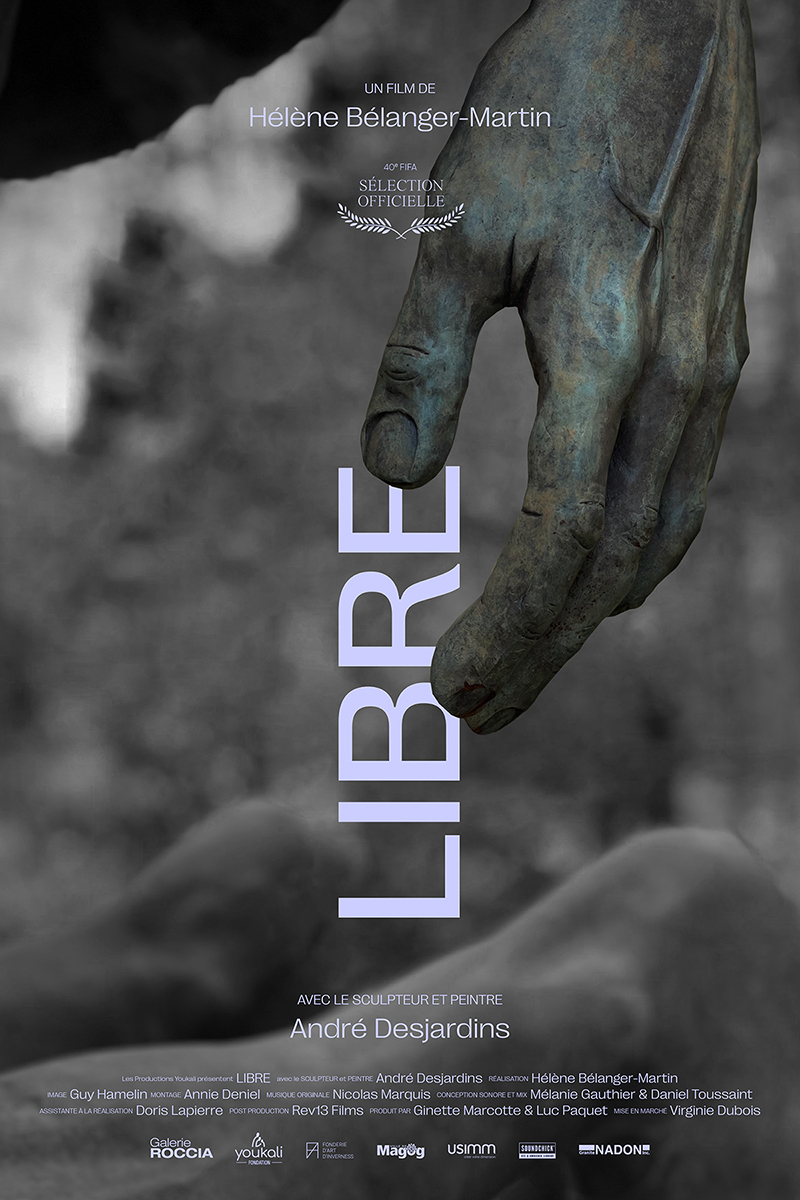 A word from the filmmaker

I love artists’ studios. This intimate, sacred, often impenetrable space fascinates me. As a gallery owner, I have visited several of them and each time, the experience has been impactful. Each studio is an open window on the mystery, the beauty and the uniqueness of the creative gesture. These visits have always broadened my understanding of the artwork and have allowed me to discover the human being behind the artist. While I liked all the studios I visited, my favourite remains that of my life partner, the sculptor and painter André Desjardins. As soon as the opportunity arises, I quietly sneak into the studio, settle down in a corner, and observe in silence. I’ve been watching him work for more than two decades, yet I never tire of it. Letting myself be lulled by his gestures and his breath. Taming the smells of the materials he uses. Listening to the sound of his tools mingling with those of the forest all around. Marvelling at his patience, his perseverance, his curiosity. Seeing him doubt. Knowing that he will do and redo. Wondering how he manages to stay so focused. This documentary captures and shares these moments.

Over the past few years, André had talked about his wish to create a second monumental work. I knew that these were far from casual remarks, he was already looking forward to rising to the challenge. When our friend and patron Luc Paquet offered to fund the project, his excitement reached new heights. The adventure took a very special meaning when André learned that the monumental sculpture was to be installed on the shores of Lake Memphremagog, the lake that had shaped his childhood and adolescence. The driving force behind the creation of this work became very clear: to pay homage to this body of water which he knows intimately and cherishes deeply. Then it dawned on me that this creation would be, for André, a return to his roots, to his past and to his memories. This intimate process had to be part of the film. I wanted to sift through time with him, go back to the source. The sudden death of his father when he was only a child, the adolescence spent at home to keep his mother company, the idea of building a miniature city, the four years it took to complete it, from the age of 12 to 16. Seeking refuge in creativity. Finding an island. Not wanting to leave it. Still there today. This is the story I wanted to tell. The story of an artist with an insatiable need to create.

Word from the distributor

The artist and his muse.

Many fictions have addressed the subject. One naturally thinks of Camille Claudel passionately relating the mythical relationship between the sculptor Auguste Rodin and his muse. We also think of the legendary couples Roberto Rossellini and Ingrid Bergman or Michelangelo Antonioni and Monica Vitti. The documentary genre has also focused on the phenomenon. The musical “biopic” “Leonard and Marianne” by Nick Broomfield, for example. As have several others. But usually, it’s from the perspective of the artist fascinated and inspired by his muse. The opposite is rarely seen in film. The point of view of the muse on the revered artist.

With FREE, Hélène Bélanger-Martin, filmmaker, muse and wife, takes an affectionate and thoughtful look at the work of her life partner, André Desjardins. Drawing on their unique relationship, the filmmaker offers us a privileged incursion into the heart of the painter-sculptor’s artistic process. Authentic and sensitive, Desjardins welcomes her into his studio and opens up to the camera.

A camera that floats in this quasi-intangible space-time inherent to the growth and production of a work in progress. A lens that captures the moments of inspiration as much as the moments of doubt and questioning.

With a skillful interweaving of intimate interviews, candid testimonies and creative impulses, carried by the careful strokes of a spatula, the caress of a breeze, the shared laughter of family gatherings and melodious bird songs here and there, Free reveals, nourishes, enlightens and soothes.

With a skillful interweaving of intimate interviews, candid testimonies and creative impulses, carried by the careful strokes of a spatula, the caress of a breeze, the shared laughter of family gatherings and melodious bird songs here and there, Free reveals, nourishes, enlightens and soothes.

A film revealing the fascinating stages of the creation of a monumental work.

A film without any artifice that touches the soul.